Giuliani: Mueller Admits He Can’t Indict Trump, All He Can Do Is ‘Write a Report’ 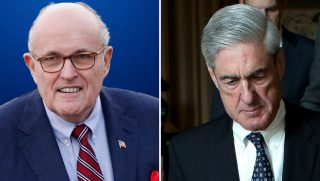 President Donald Trump’s lawyer Rudy Giuliani said on Wednesday that special counsel Robert Mueller’s team has informed him they understand that they cannot indict a sitting president.
“All they get to do is write a report,” Giuliani told CNN. “They can’t indict. At least they acknowledged that to us after some battling, they acknowledged that to us.”

CNN added, “That conclusion is likely based on longstanding Justice Department guidelines. It is not about any assessment of the evidence Mueller’s team has compiled.”

The Department of Justice’s Office of Legal Counsel looked at the issue both during the Nixon and Clinton administrations and reached the same conclusion, which was recorded in official legal memos.


More @ Western Journalism
Posted by Brock Townsend at Thursday, May 17, 2018