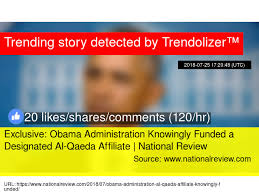 The Middle East Forum has discovered that the Obama administration approved a grant of $200,000 of taxpayer money to an al-Qaeda affiliate in Sudan — a decade after the U.S. Treasury designated it as a terrorist-financing organization. More stunningly, government officials specifically authorized the release of at least $115,000 of this grant even after learning that it was a designated terror organization.

The story began in October 2004, when the U.S. Treasury Department’s Office of Foreign Assets Control (OFAC) designated the Khartoum-based Islamic Relief Agency (ISRA), also known as the Islamic African Relief Agency (IARA), as a terror-financing organization. It did so because of ISRA’s links to Osama bin Laden and his organization Maktab al-Khidamat (MK), the precursor of al-Qaeda.