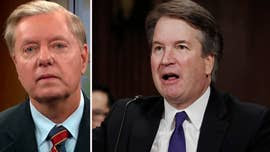 President Trump on Saturday evening clarified the parameters for an FBI investigation he ordered into the sexual assault allegations against Supreme Court nominee Judge Brett Kavanaugh.

Previous media reports said the FBI probe would be limited in how many accusers the agency would interview regarding Kavanaugh’s past – but the president wrote Saturday that he had placed no such barriers on investigators.

President Trump late Saturday stoked speculation that Sen. Dianne Feinstein (D-Calif.) or her staff may have leaked the letter in which Christine Blasey Ford accused Supreme Court nominee Brett Kavanaugh of sexual assault, basing his claims on her body language.

“Dianne Feinstein, did you leak? Remember her answer. 'Did you leak the document? Uh. Uh. What? What? No. Uh. No. Uh. I didn’t le— well, wait one minute. No, no, we didn’t leak it,' " Trump told the crowd during a rally in West Virginia, mocking Feinstein's denial during a Senate Judiciary Committee hearing last week.