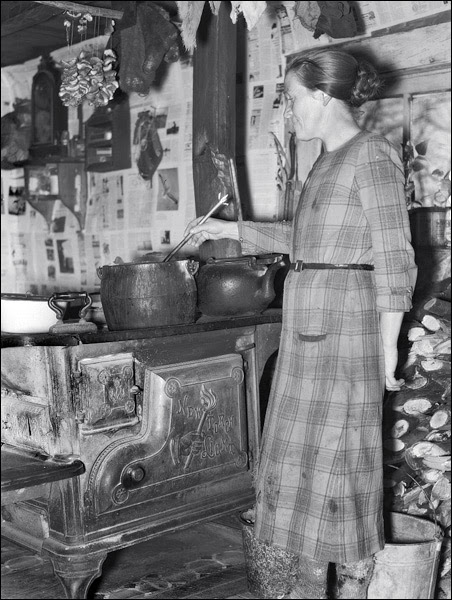 As noted for the photo of Jennings, Maryland in Woodpile Report 549, Garret County is where West Virginia, southern Pennsylvania and western Maryland meet.


The stove is branded "New Torch Light" and almost certainly did duty as both cook stove and heating stove.

James Dakin at Bison Prepper has a few words for us on the same subject. An excerpt:

The nation state has an implicit contract. Pay your taxes and obey the laws even if no cop is watching, and we will do our best to protect you. When they fail to protect you, that is probabilities and strategic issues, as long as they tried. Now they don’t even try, and go beyond even that and actively try to harm you for their own power and profit. You have no moral obligation to uphold your side of the bargain, since they abandoned theirs.

Breitbart - Pope Francis Compares Populists to Hitler, Born of ‘Hate’ ... migrants must be welcomed with an open heart and open doors

A federal judge tore into the government Monday for trying to vacate court orders that denied privilege over records on the botched gun-running operation known as Fast and Furious.

Urban Survival Site - 18 Tips For Bug Out Vehicles ... a four-wheel drive vehicle and plenty of gas is just the start


Edward Erler at American Mind restates what was once accepted and obvious:

No nation is sovereign if it cannot control its borders and have full authority to determine who can become citizens. More than a century ago, the Supreme Court announced what was considered the commonsense understanding of the matter when it remarked that “it is an accepted maxim of international sovereignty, and essential to self-preservation, to forbid the entrance of foreigners within its dominions, or to admit them only in such cases and upon such conditions as it may see fit to prescribe.”

Victor Hanson muses on the contradictions of the "caravan" approaching the southern border through Mexico in his essay at American Greatness. This excerpt stands out even from such rich pickings as Mr. Hanson provides:

The modern social framework is that whites have responsibilities while non-whites have entitlements.
Every migrant thus represents a new marginal burden. One more person you must praise and provide for as they insult and demand.
Opposition shouldn't be a surprise.

Revolutionary and insurgent sentiment on the Left is growing, and we’re seeing it via sporadic political violence as major Democratic voices can be perceived to give a wink and a nod. In many of today’s insurgent movements, politicians are able to officially reject political violence while maintaining its benefits, carried out by the militant wing...
What we’re seeing today with regard to the Democratic Party and Leftist militant organizations at times reminds me of the relationships often found during insurgencies.