We have 2-foot-tall squirrels? NC biologists posted a photo of one and it’s huge 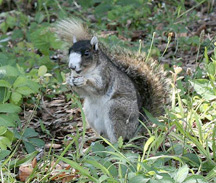 While fox squirrels can sometimes resemble gray squirrels in coloration, there are noticeable differences. In eastern regions such as the Appalachians, the squirrels can sport more of a reddish coat than gray squirrels, with dark brown and even black faces and backs. The most distinguishable have striking while patches on the nose, feet and tail. Photos credit: Jeffrey S. Pippen

We have one who has been living here since 2002.

North Carolinians have come to expect rattlesnakes, bears, alligators and possibly even Bigfoot in wooded areas, but state wildlife officials posted images this month of a lesser known oddity that is just as startling: A 2-foot-tall squirrel.

The photos were captured by camera traps in Robeson County, and reaction on Facebook can be summed up by commenter Ruth Bergstein of Greensboro: “He’s huge!”