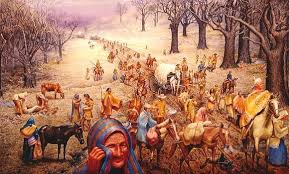 Slaveholding among the Cherokees had greatly increased in the years after 1839, and by 1860 there were nearly 4000 African slaves among 21,000 Cherokee — with 10 percent owning more than one slave. Had the Cherokee sided with the North in 1861, they would have kept their slaves.
Bernhard Thuersam, www.Circa1865.org    The Great American Political Divide

“The institution of black slavery among the Cherokees had a major impact on their economic growth after 1839 as well as on the emerging division between full-bloods and mixed bloods. It also dealt a fatal blow to Cherokee sovereignty after 1861, forcing the nation to choose between siding with the Union or the Confederacy.

While Indian tradition had for centuries allowed a form of slavery for captured enemies, the southeastern Indians never had much economic use for Indian captives. Probably as many captives were adopted into the tribe of their captors as were enslaved, and more were simply killed in rituals of tribal vengeance.

Prior to 1794 the cheap labor of Africans had been of small use to a people whose chief income came from skill in hunting furs and hides and whose agricultural needs were easily provided by the communally cultivated farms tended by women, children and old men. From 1794 to 1822, the federal government gave the men plows, hoes and seeds . . . [Those] who could afford it found that owning slaves provided many advantages, especially in a free-market, profit-oriented economy.

[A new] creation myth developed among the southeastern Indians after 1790 that explained that when the Great Spirit first created red, white and black people, he had given bows and arrows to the red man, paper and pens to the white man, and hoes and axes to the black man. This myth legitimized the servant role for blacks in southeastern Indian culture; it smoothed the transition for Indian males from warriors to slave masters. Being true to Cherokee ethnic values was the paramount issue; they never viewed Africans as their brothers.

After removal to the West, Cherokees who owned slaves found it far easier to resettle than those who had no slaves. Slave labor built their new homes, cleared their land, fenced their gardens and pastures, cultivated their fields, planted and gathered their crops, and tended their herds of cattle, horses and sheep.”