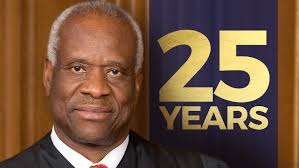 Justice Clarence Thomas on Tuesday said that while he agrees with the Supreme Court's decision to not take up a challenge to an Indiana abortion law at this moment, he believes the court will have to take up the issue in the near future.

The Supreme Court ruled to uphold an Indiana law on the disposal of fetal remains but declined to review a lower court's ruling blocking an Indiana law banning abortions on the basis of the fetus's sex, disability or ethnicity.