Bozell: ‘There Are More Prostitutes’ in US Than CNN Viewers 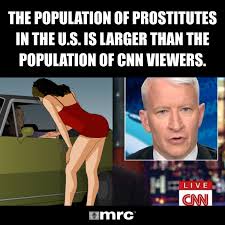 & more honest to boot. I count them as some of my best friends in my spry75 years. :)


There’s no denying that CNN has an out-sized influence in the cable news landscape.

Even the network’s slogan attests to it: “This is CNN,” it intones, every word pronounced distinctly and with resonance, as if the announcer were describing a Fabergé egg or a Picasso.

Well, in fairness, there aren’t many Fabergé eggs or Picassos, and there aren’t too many viewers of CNN to go around, either.

In fact, as Brent Bozell — president of the conservative Media Resource Center — pointed out recently, there are more prostitutes in America than there are CNN viewers.

And of course, he noted, it’s largely because of the network’s inveterate hatred of Donald Trump.