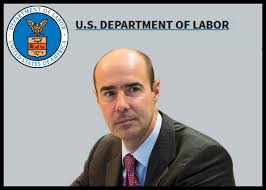 Another Trump administration nomination is driving progressives up the wall.

After Labor Secretary Alex Acosta was forced to resign due to backlash over his involvement in a lenient plea deal with financier Jeffrey Epstein in 2008 — who now faces sex trafficking charges — Trump tapped attorney Eugene Scalia to fill the vacancy.

And the left lost its collective mind at Trump’s nomination announcement.