The Revenge of the Confederacy 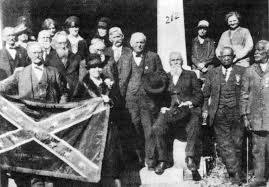 The American political divide is no longer between Republicans and Democrats, conservatives and liberals, religionists and secularists.  It is between roughly two halves of the country, each of which would be perfectly happy to see the other wiped, by violence if necessary, from the face of the earth.  That was not how the North and the South felt about each other when President Lincoln ordered the invasion of Virginia by Union troops in 1861, and perhaps not four years later when Lee surrendered his sword to Grant at Appomattox.  Politics in America is no longer political, or even ideological.  It is existential, the existence of one side having become a moral and personal affront to the other.  Each can no longer tolerate the sight, sound, smell, or thought of the other.