"Forrest had three horses shot from underneath him here. This (and the battle of "Battleground" and Days Gap) was a running battle that took place about fifteen miles from where I was raised." 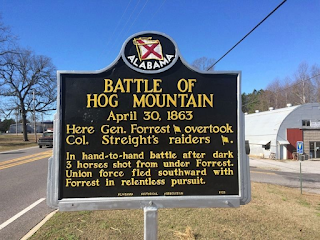 In Defense of General Forrest


Col. Abel Streight's force was made up largely of "tories" (Union loyalists) who were recruited from northwest Alabama. Most of these men belonged to the 1st Ala. Cav. U.S. Other regiments who took part were the 3rd Ohio, 51st Indiana, 73rd Illinois, and 18th Illinois. The men of the 1st Ala. were practically on a cake walk as they led Streight through familiar and often times loyalist territory. The main objective was to destroy the Western and Atlantic railroad and it's sidetracks that were being used to supply the Army of Tennessee. Things were going good for Col. Streight until CSA Gen. Phillip Roddey of Moulton, Alabama began to screen the movements of the enemy force and worked in conjunction with Forrest to begin pursuit of the invaders.

If anyone isn't familiar with the story, the capture of Streight and his men was a stroke of genius executed by Forrest who was outnumbered approximately 3 to 1. It is a great story and I will not spoil it here. The fighting began at Battleground, then on to Hog Mountain, Days Gap (Blountsville, and parts of what is presently Cullman and Etowah counties today), and then on to Gadsden and the battle of Black Water Creek where Confederate Heroine, Emma Samson, did her part to show Forrest a ford in which to cross and pursue the Union forces (Streight's men had burned every bridge as they crossed it along this route which is pretty much U.S. Hwy 278 today). As an interesting note, Forrest also killed fellow Confederate Officer Lt. A. Wills Gould who shot Forrest in the hip after a disagreement where Gould allowed artillery pieces to be captured and spiked. After being shot, Forrest stabbed Gould who lingered long enough to apologize to Forrest for shooting him. At first it appeared that NBF's wound would prove fatal, but he recovered fully and in time for Chickamauga.
http://www.encyclopediaofalabama.org/article/h-1380
Posted by Brock Townsend at Friday, May 22, 2020