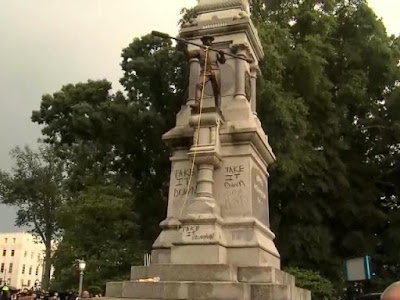 Makes me want to cry as I walked to the park everyday with my PaPa to feed the squirrels. :(

Protesters in downtown Raleigh on Friday night tore down two statues on a Confederate monument at the State Capitol.

The monument has a statue on either side. At around 9 p.m., protesters used a strap to pull down one statue before quickly removing the second one. Both statues were dragged in the street and eventually tied to light fixtures and pulled up to mimic hangings.