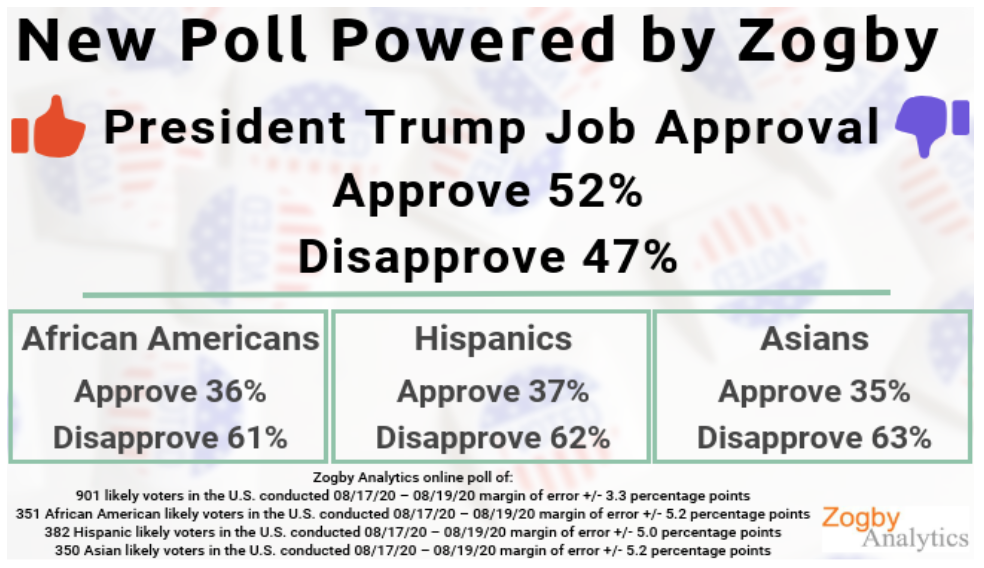 Buoyed by blacks and independent voters, as well as urban dwellers shocked by the Black Lives Matter protest violence raging in some cities, President Trump’s approval rating has hit a new high, according to a survey heavy with minority voters. The latest Zogby Analytics poll just shared with Secrets had Trump’s approval at 52%. “The president has recorded his best job approval rating on record,” said pollster Jonathan Zogby.
What’s more, his approval rating among minorities was solid and, in the case of African Americans, shockingly high. Zogby said 36% of blacks approve of the president, as do 37% of Hispanics and 35% of Asians. Approval among independent voters is also up, to 44%. And “intriguingly,” said Zogby, 23% of Democrats approve of Trump.


A Pew Research Center poll that’s already a month old (and a lot happened since) concluded that violent crime is a major issue according to 59% of voters (almost as much as coronavirus): 74% of Republicans and 46% of Democrats. But during the DNC, held after the poll was already out, the issue wasn’t addressed at all. Democrats talked about police violence, but not riot violence.

At this week’s RNC, this situation is -of course- very different. The DNC pushes the GOP into the role of the party of law and order, and they’re all too willing to take up that role. But I was wondering about something else, or “bigger”, this morning. That is, Joe Biden et al are very light on policies, because in their view their most important issue is to get people to vote *against* Donald Trump, rather than *for* Biden.

And I’m thinking maybe that’s starting to boomerang, to blow up in their faces, whether perhaps people are beginning to lean towards NOT voting for Joe Biden, instead of NOT voting for Donald Trump, “at any cost”. In that context, it appears telling that according to a new Reuters/Ipsos poll, Biden saw no “convention poll bounce” in his numbers after the DNC, while ironically, Trump did.