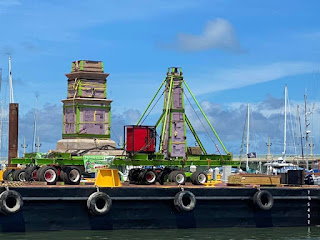 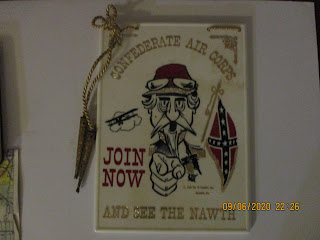 Despondent watching those who accepted money to tear down the Cenotaph of our sainted dead in St. Augustine as they began their unholy charge;  I would hear a media report that the Board of Governors at the University of North Carolina Asheville had voted to change the names of two buildings at the Technology Center on Campus:  that of the Honorable Governor Zebulon B. Vance and that of Governor Clyde Hoey.

They would defend this Board action centered on their wishes that everyone at their diverse Campus should not feel negatively sensitive because of whom these men were. Vance, because he owned slaves and Hoey because he was a segregationist.

Some more poppycock from a school system that had toppled the Silent Sam Cenotaph on the Campus in Chapel Hill, and placed themselves above the law by continuing to ignore the lawful court order to put it back.

Never mind that the Father of our Nation, George Washington owned slaves, Thomas Jefferson owned slaves , Benjamin Franklin owned slaves, and so did “good help is hard to find Ulysses S. Grant” when he entered the White House.

And not to forget that US President Lincoln was a staunch segregationist and offered to keep the Africans in slavery forever if the men of the South would come back to Congress and ratify the Corwin Amendment; our “root hog or die” President.

Governor Hoey, like most of the members of the North Carolina Assembly in 1937 -1941” could be called “segregationists”.. However, we must take a look at what he did to move the lives of the black populous forward on the life highway for social, political, economic, and most importantly educational vertical mobility before condemning him to oblivion.

Following the 1938 Gaines Supreme Court decision on racial segregation in higher education, Hoey asked the North Carolina Legislature to provide for segregated higher education for blacks. He said that the people of the State believe in equal opportunity in their respective fields of service and that the white race cannot offer to do less than simple justice to the Negro. So much he did to further this charge; his name was placed on a building at North Carolina Central University, a Historic Black College.

And, I might add, that all of my teachers from grade school until my senior year with the exception of Mrs. Chandler and the new Principal, Dr. Robert Holtzclaw, were graduates of these Jim Crow schools. God bless them!

On Wednesday, September 9, 2020, in protest of this Board action, I would don the uniform of the Southern soldier and head for the UNCA campus. Upon arriving, I would make my way through a sea of yard signs that read; Black Lives Matter and adjacent to them signs depicting the Lesbian, Gay Transgender flag. I would be met by the new black University Police Chief who came out with several of his staff and assured me that as long as I was there; he and his Officers would look out for my safety.

On this day, I would do what the Board of Trustees should have done ....Teach their students!

The first student that I encountered would ask me “didn't I think it was insulting to the Black Lives Matter organization for me to be on campus posting the Confederate flag and don in a Confederate soldiers uniform , and what was my purpose for being there?”

I told him that the domestic terrorist of Black Lives Matter had come into my home town burning, looting, and maiming our citizens while leaving behind destruction, and blaming it on our black citizens. And furthermore, placing the Gay Pride flag alongside the Black Lives Matter signs on this campus in the heart of the Bible belt  - as though our black citizen’s sanction- is the real offense . No, they just tolerate it.

I told him and several other students now gathered that I was there to protest the Board of Governors removal of Vance and Hoey's names from the buildings of the Technology Center.

“Are you an Uncle Tom? Don't you know Hoey was a segregationist?” he retorted.

I would repeat the aforementioned.  And that when I marched to Texas on the Historic March Across Dixie, as I passed a schoolhouse in Alabama, several black men would ask my brother would I come into their school and tell the students about the journey I was on.

Ironically, on the front of the building was a large bronze plaque that read ... John Essex School, A George Wallace Magnet School.  And when I entered the school there was nothing but black kids, and only one white lady teacher. Governor Wallace was probably the most famous segregationist in the South. However, black folks voted for him in majority every time he ran for Governor, and as well his wife when she ran. Many of the black citizens of Alabama told me to forget about some of the things he said;  “look at what he did for us” they said.

I told him to "go into the book store and ask whoever was in charge to order the Historic March Across Dixie Photo Journal and Documentary DVD's by Terry Lee Edgerton so that he might clean up his tunnel vision about the honorable people of the South."

One Jewish boy said that I put the Mayor of Asheville in a box unjustifiably by stating that she had betrayed the Jewish people because she sanctioned the removal of the Vance monument in downtown Asheville.  He assured me that all Jews don't think alike.

I told him to "head to the library and read a copy of the Vance lecture:  The Scattered Nations."  And that I agreed with him about Jews with differing opinions; George Soros and the thugs that he sponsors... Black Lives Matter, ANTIFA, and a host of others who have used black folks to enrich their coffers, leaving nothing behind for them anything but suspicion and hate, for something they wanted no part of .... just like the removal of Vance's Cenotaph in downtown Asheville; a Crown jewel that is as much theirs as any other citizen of our City.

Governor Vance is the most decorated citizen of our great State, and his achievements for all of our people are unparalleled.

After several hours of teaching, I would thank the Chief and his staff. He would insist on walking me to my car. And in our conversation as we walked, it was determined that we might be kin folk. God bless you!