Via Resistor in the Rockies 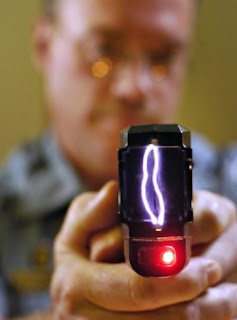 A state police officer in New Mexico is being sued after he allegedly tasered a child in a school playground for no reason other than he refused to clean the cop’s patrol car.

The boy’s legal guardian, Rachel Higgins, claims that Officer Chris Webb shot the boy, referred to as “R.D.”, with a 50,000 volt stun gun while visiting on a “career day” at Tularosa New Mexico Intermediate School on May 4.

The complaint notes that the officer approached a group of boys and asked which of them wanted to clean his car. When R.D. said he had no desire to clean the patrol vehicle, Officer Webb is claimed to have stated “‘Let me show you what happens to people who do not listen to the police.’”

He then pointed his taser at the boy, according to the report, and fired two barbs directly into the 10-year old’s chest, electrifying him and causing him to blackout.

Webb then extracted the barbs from the child’s chest, leaving scarring ” that look like cigarette burns”.

“Instead of calling emergency medical personnel, Officer Webb pulled out the barbs and took the boy to the school principal’s office,” the complaint states.