A Line In The Sand? 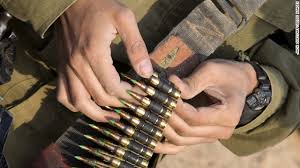 The case of Nathan Haddad should boil the blood of any good American. A twelve-year veteran of the Army, with four deployments, is a decorated combat veteran and now, probably, a felon. His crime: possession of five empty 30-round clips for an AR-15. The clips were stowed in the trunk of his car at the time of a traffic stop.

This is why, even though one is a law-abiding citizen, never talk to police officers and never give them permission to search your vehicle without a warrant describing in detail the area to be searched and the things to be seized. As Haddad found out, assuming that he did give permission to search his vehicle, thinking himself to be innocent of any crimes, now faces up to 35 years in prison, 7 years for each clip.

In legalese, they will probably give him something like 30 days if he pleads guilty to a felony, after which he will not be able to legally own a weapon, or even have access to a weapon for the rest of his life. This is called manufacturing a felony and the only reason to do so is to disarm as many people as possible by trumping up charges and pumping up sentences to frighten them into pleading to something that should be thrown out of court the minute the charges are brought. In the old days, when disarmament was not the goal, these things were always plead down, not up, for first time offenders.