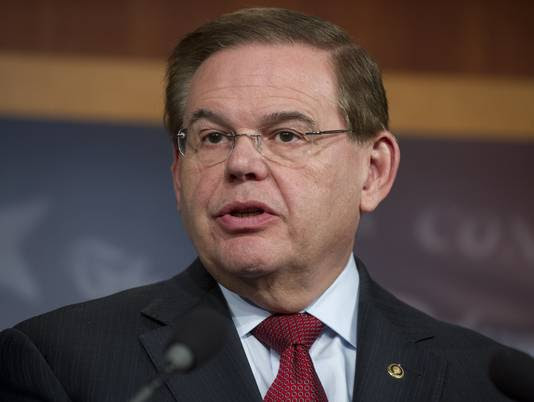 Allegations resurface as Sen. Menendez is about to become chairman of the powerful Senate Foreign Relations Committee.

Democratic Sen. Robert Menendez of New Jersey denied Wednesday that he accepted free plane trips and contact with prostitutes from a Florida eye doctor whose offices were raided by federal agents Tuesday night.

The raid, reported by The Miami Herald, targeted Salomon Melgen, a physician described by the newspaper as a prominent campaign donor to Menendez and other Democrats. The Herald said Melgen owes $11.1 million in back taxes.

The conservative Daily Caller news website quotes anonymous sources who allege Melgen provided Menendez with prostitutes — some of them underage — at his luxury home at the Casa de Campo resort in the Dominican Republic.

"Dr. Melgen has been a friend and political supporter of Sen. Menendez for many years," the statement read. "Sen. Menendez has traveled on Dr. Melgen's plane on three occasions, all of which have been paid for and reported appropriately. Any allegations of engaging with prostitutes are manufactured by a politically motivated right-wing blog and are false."

FBI Special Agent James Marshall confirmed Wednesday that "we are conducting law enforcement activity in the general vicinity" of Metrocentre Boulevard, the location of one of Melgen's offices in West Palm Beach, Fla.

According to the Herald story, the FBI investigation is believed to focus on Melgen's finances and allegations that he provided Menendez with free trips and prostitutes. Prostitution is legal in the Dominican Republic.