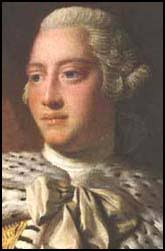 On 29 January 1820 died King George III, deaf, blind, and insane. Although the myths of American history paint him as a tyrant, he was in fact a pious and serious man. Unlike all his relatives, he married at 22 and never kept a mistress. He was devoted to his wife, by whom he had 15 children. He was often sneered at as "Farmer George" because of his devotion to scientific farming.

Truth is, George III was a constitutional monarch with limited powers. It was the Parliament that sought to tyrannize over America, and actually, to get the Americans to pay for some of the cost of defending themselves by new taxes.

That didn't work out. Still, if you look at how little government interfered in the citizens' lives under King George III, & how little they paid in taxes, how free they were, it's enough to make you nostalgic for "Farmer George."
Posted by Brock Townsend at Tuesday, January 29, 2013