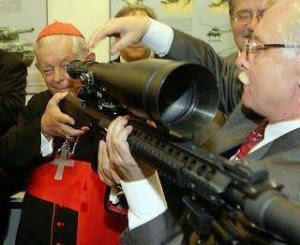 Let’s make something clear right away. Pope Benedict has not endorsed the Obama administration’s gun-control plans. The Pope has said nothing on the subject. But Father Federico Lombardi, the director of the Vatican press office—has released a statement on gun control, in his weekly editorial commentary for Vatican Radio. Inevitably his editorial will be portrayed by careless reporters as an official statement of the Vatican’s position. It is not; Father Lombardi does not set policy for the Vatican, or make authoritative statements for the Catholic Church.

”The initiatives announced by the United States government in view of limiting and controlling the diffusion and use of arms are certainly a step in the right direction,” Father Lombardi pronounced as he began his commentary. Obviously he was referring to the executive orders issued by President Obama (who, by the way, is not “the United States government”) last week. The wording of the editorial is vague; we don’t know which initiatives in particular met with Father Lombardi’s approval. We don’t know, actually, whether the Vatican spokesman is actually acquainted with the specifics of the White House plans. In short—let’s not mince words—we don’t know whether Father Lombardi knows what he’s talking about.

Vatican Bank is the main shareholder in ‘Pietro Beretta’ arms

Perhaps few people know that Pietro Beretta arms factory Ltd. (the largest arms industry in the world) and is controlled by the Holding SpA Beretta and the majority shareholder of the Beretta Holding SpA after Gussalli Ugo Beretta, is the IOR (Institute for Works of Religion [commonly known as the Vatican Bank]) private institution founded in 1942 by Pope Pius XII and headquartered in Vatican City.