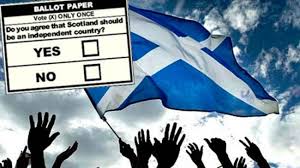 I’ve written before about independence movements in Europe. Not only are we going to see the European Union crack up and fall apart in the near future (thought timing this kind of thing is virtually impossible) but we find that regions within European nations are themselves ready to secede from the “mother country.” Probably the most well known of these is Catalonia, which is the economic power house for Spain, but has its own language and is tired of being drained by the rest. In Italy, we have the growing Venetian independence party wanting to re-establish the Republic of Venice. This is an exciting time to watch the news and possibly see more manageable and prosperous countries emerge!

Closer to home, we also have Scotland seriously considering separating from Britain and no longer being part of the United Kingdom. How likely is such secession? Likely enough that the government of Great Britain has begun making threats.


“The pro-independence Scottish National Party (SNP) that runs Scotland’s devolved government plans to hold a referendum on the politically sensitive and emotionally charged subject next year, and has played down the impact of a ‘Yes’ vote on Scotland’s international status. But the 57-page legal opinion – drafted for the British government by two leading independent experts on international law – said the implications could be far-reaching. The overwhelming weight of international precedent suggested Scotland would be legally deemed a ‘new state,’ it said – a scenario that would force it to re-apply to join international bodies such as the EU, the United Nations and NATO. ‘If Scotland became independent, only the “remainder of the UK” would automatically continue to exercise the same rights, obligations and powers under international law as the UK currently does, and would not have to re-negotiate existing treaties or re-apply for membership of international organizations,’ the government said.”

I can only hope that the Scottish people reply, “You promise?”

Why would Scotland want to be part of NATO? Do the Scottish people feel left out and deprived at the thought of not having a role in supporting Al Qaeda-affiliated terrorists in Libya, Syria, and elsewhere? I can’t imagine how it could be considered attractive to support troops all over North Africa and the Middle East. Why on earth would anyone feel threatened by the possibility of losing NATO membership? Why would they even bother to re-apply?