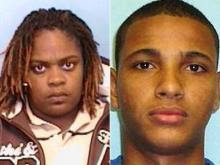 Raeford, N.C. — Hoke County authorities said Monday that they are searching for two people in connection with the attempted robbery of a Raeford business in which one of the suspected robbers was killed.

Several people entered All American Mattress and Furniture, at 9734 Aberdeen Road, at about 8:30 p.m. Friday, armed with a rifle and brass knuckles, authorities said.

The business owner, whose name wasn't released, was able to disarm the robber with the rifle, and during the struggle over the gun, 16-year-old David Frame was shot and killed, authorities said.

Three other robbers fled the business and left in a waiting vehicle.