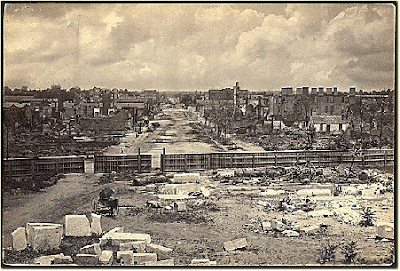 Columbia, South Carolina,
as it looked the morning after a visit from sherman's fire fiends. "
by John T. Trowbridge
Northern journalist

Early in the evening [of February 17] as the inhabitants, quieted by General Sherman's assurances, were about retiring to their beds, a rocket went up in the lower part of the city. Another in the center, and a third in the upper part of town, succeeded. Dr. R.W. Gibbes was in the street near one of the Federal guards, who exclaimed on seeing the signals, "My God! I pity your city!" Mr. Goodwyn, who was mayor at the time, reports a similar remark from an Iowa soldier. "Your city is doomed! These rockets are the signal!" Immediately afterwards fires broke out in twenty different places.

The dwellings of Confederate Treasury Secretary George A. Trenholm and General Wade Hampton were among the first to burst into flames. Soldiers went from house to house, spreading the conflagration. Fireballs, composed of cotton saturated with turpentine, were thrown in at doors and windows. Many houses were entered and fired by means of combustible liquids poured upon beds and clothing, ignited by wads of burning cotton, or by matches from a soldier's pocket. The fire department came out in force, but the hose-pipes were cut to pieces and the men driven from the streets. At the same time universal plundering and robbery began.

The burning of the house of R.W. Gibbes, an eminent physician, well-known to the scientific world, was thus described to me by his son:

"He had a guard at the front door; but some soldiers climbed in at the rear of the house, got into the parlor, heaped together sheets, poured turpentine over them, piled chairs on them, and set them on fire. As he remonstrated with them, they laughed at him. The guard at the front door could do nothing, for if he left his post, other soldiers would come in that way.

Columbia, south carolina, as it looked the morning after a visit from sherman's fire fiends. "The guard had a disabled foot, and my father had dressed it for him. He appeared very grateful for the favor, and earnestly advised my father to save all his valuables. The house was full of costly paintings, and curiosities of art and natural history, and my father did not know what to save and what to leave behind. He finally tied up in a bedquilt a quantity of silver and gems. As he was going out the door the house was already on fire behind him -- the guard said, 'Is that all you can save?" "It is all I can carry,' said my father. 'Leave that with me,' said the guard; 'I will take charge of it, while you go back and get another bundle.' My father thought he was very kind. He went back for another bundles, and while he was gone, the guard ran off on his lame leg with all the gems and silver."

The soldiers, in their march through Georgia, and thus far into South Carolina, had a wonderful skill in finding treasures. They had two kinds of divining-rods," negroes and bayonets. What the unfaithful servants of the rich failed to reveal, the other instruments, by thorough and constant practice, were generally able to discover. On the night of the fire, a thousand men could be seen in the yards and gardens of Columbia by the glare of the flames, probing the earth with bayonets.

The dismay and terror of the inhabitants can scarcely be conceived. They had two enemies, the fire in their house and the soldiery without. Many who attempted to bear away portions of their goods were robbed by the way. Trunks and bundles were snatched from the hands of hurrying fugitives, broken open, rifled, and then hurled into the flames. Ornaments were plucked from the necks and arms of ladies, and caskets from their hands. Even children and negroes were robbed.

Fortunately the streets of Columbia were broad, else many of the fugitives must have perished in the flames which met them on all sides. The exodus of homeless families, flying between walls of fire, was a terrible and piteous spectacle. Some fled to the parks; others to the open ground without the city; numbers sought refuge in the graveyards. Isolated and unburned dwellings were crowded to excess with fugitives.

Three-fifths of the city in bulk, and four-fifths in value, were destroyed. The loss of property is estimated at thirty millions. No more respect seems to have been shown for buildings commonly deemed sacred, than for any others. The churches were pillaged, and afterwards burned. St. Mary's College, a Catholic institution, shared their fate. The Catholic Convent, to which had been confided for safety many young ladies, not nuns, and stores of treasure, was ruthlessly sacked. The soldiers drank the sacramental wine, and profaned with fiery draughts of vulgar whiskey the goblets of the communion services. Some went off reeling under the weight of priestly robes, holy vessels and candlesticks.

Some curious incidents occurred. One man's treasure, concealed by his garden fence, escaped the soldiers' divining-rods, but was afterwards discovered by a hitched horse pawing the earth from the buried box. Some hidden guns had defied the most diligent search, until a chicken, chased by a soldier ran into a hole beneath the house. The soldier, crawling after and putting in his hand for the chicken, found the guns.

A soldier, passing in the streets and seeing some children playing with a beautiful little greyhound, amused himself by beating its brains out. Some treasures were buried in cemeteries, but they did not always escape the search of the soldiers, who showed a strong distrust of new-made graves.

Of the desolation and horrors our army left behind it, no description can be given. Here is a single instance: At a factory on the Congaree, just out of Columbia, there remained for six weeks a pile of sixty-five dead horses and mules, shot by Sherman's men. It was impossible to bury them, all the shovels, spades, and other farming implements of the kind having been carried off or destroyed.