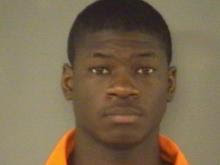 My Dixieland neck of the woods.  Good job, Ma'am!

An Elm City woman shot at two men who broke into her home on Tonya Road Friday morning, her husband told WRAL News.

Chris Griffin said his wife, who had stayed home sick from work, heard a noise around 11 a.m. and then saw two men outside her house. When she heard them start kicking in the back door, she hid in the bedroom closet with a cellphone and a pistol.

The men ransacked the house, and when they opened the closet door, she fired at them, Griffin said. One man was struck, authorities said.

The men fled, and neighbor Wayne Crumpler said he heard them yelling for help.

"I heard somebody out at the road. He was hollering, 'Help me,' waving his arms, jumping up and down trying to stop traffic," Crumpler said. "There was another guy in the background. I heard him hollering, 'Help me. I've been shot in the chest. I'm dying.'"

The wounded man then started toward Crumpler's house.

"He started in this direction. I stepped inside and got my revolver," he said. "I told him to hold it."

The man then ran into the woods, Crumpler said.