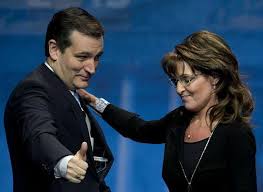 Sen. R. Edward "Ted" Cruz (R.-Texas). Cruz is part of the hard core around which the Senate GOP is forming. Like other members of this core, Cruz was opposed by the Republican establishment and generally the liberal media agrees with Sen. John S. McCain III (R-Ariz.), who called him one of the "wacko-birds."

What you might not know is that Cruz law clerked for Supreme Court Chief Justice William H. Renhquist. Later, he drafted the amicus brief signed by 31 state attorneys general and submitted to the Supreme Court in support of Dick Heller, the namesake of the landmark Heller gun rights decision. In fact, before his election to the Senate, Cruz served as the Texas solicitor general.

This is a very serious and learned man—and I am so grateful he is on our side!
Posted by Brock Townsend at Tuesday, March 19, 2013