'Any Race Except Caucasian' Posting For CBC Job Raises Eyebrows 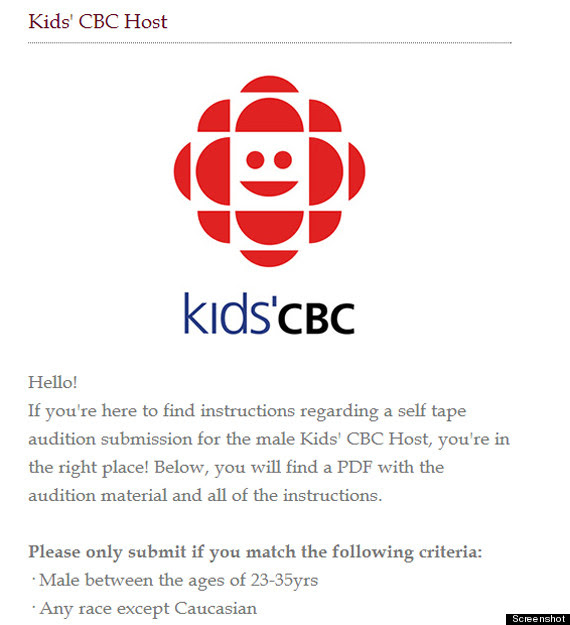 A posting for a job at CBC calling for "any race except Caucasian" is prompting shocked reactions online.

The posting appeared on the website for Larissa Mair Casting & Associates and on Craigslist, but has since been changed or pulled down completely. You can see a screenshot of the Craigslist post here.

The ad calls for audition submissions for a male host between 23-35 years of age and not white for the "Kids' CBC" programming block. Yahoo's Matthew Coutts tweeted that the new host is to appear with CBC puppet "Mamma Yamma" and personality Patty Sullivan.

The posting began making waves Monday afternoon after right-wing blogger and director at the National Citizens Coalition Stephen Taylor wrote about it on his website.

Larissa Mair told HuffPost Canada the post was made in error and that CBC did not send her the exact language. Mair said she was working with the network to change the post's wording, and that technical issues were preventing her from quickly changing it.

Soon after Mair spoke with HuffPost, the 'Caucasian' wording disappeared from the firm's website.