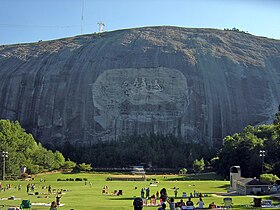 
This should kick off the Third Revolution if attempted.

STONE MOUNTAIN, Ga. -- It's one of Georgia's most famous landmarks and the largest carving of its type in the world.

But now an Atlanta man wants the Confederate Memorial relief on Stone Mountain removed.
"It's almost like a black eye or an embarrassing smudge on our culture," McCartney Forde told 11Alive News on Monday.

That's how Forde feels about the 2 football field-wide carving of Confederate President Jefferson Davis and Generals Robert E. Lee and "Stonewall" Jackson that towers 400 feet above the mountain's base.

What do you think? Vote in our poll here.
Posted by Brock Townsend at Tuesday, April 30, 2013