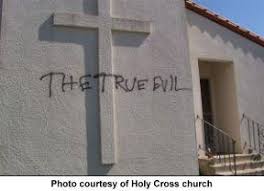 St. Jude Catholic Church of the City of Westlake Village was defaced on Easter weekend. The following brief story appeared in the April 11, 2013 issue of The Acorn, a community newspaper that serves Agoura Hills, Calabasas, Oak Park, and Westlake Village in California:

“The graffiti included a reference to homosexuality, several four-letter words and a swastika, a source told The Acorn. One scrawl reportedly said, ‘God is gay.’”

The story got no attention outside the small communities mentioned above.

I happened to see the story because I was in the Los Angeles area for a business meeting and happened to pick up the community newspaper.

If some homosexual group had been the target of anti-gay graffiti, the story would have been carried by every news outlet. Hate crime charges would have been leveled against the perpetrators.

Sensitivity training would have been demanded by homosexual groups across the country.