From Lexington Green to Cowering in the Corner: Disarmed Boston 'Shelters in Place' 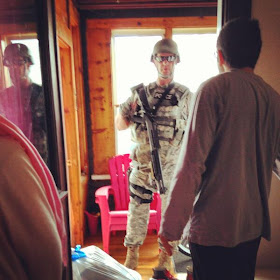 An entire city on lockdown for ONE Muslim terrorist? No, I ain't kidding, friends.  Have we had a declaration of martial law?  Not that I have heard.  Is this the Soviet Union?  Nazi Germany?  Israel, where your enemies are 9 miles away lobbing rockets at you?

This is what happens when Americans become disarmed cowards, dependent on the police for their protection, despite numerous Supreme Court rulings that police do not have a duty to protect individuals.

Behold, the lily-livered descendants of Captain John Parker and his citizen army, letting the jack-booted thugs invade their homes and imprison them there.