The Hazards Of A Militarized Police Force 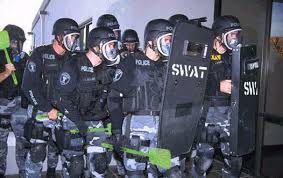 
Tactical teams seeking their terrorist prey in the greater Boston area did so in great numbers — numbers that would make military commanders in Afghanistan envious. Video footage showed the American law enforcement warrior looking for a fight.
Citizens cheered as the second terrorist was captured, jubilation spread across the country. We American Law Men were especially proud as our brothers in the Boston area took the fight to the terrorist. These men and women are true American Patriots — a testament to the “Warrior Spirit” in law enforcement — as tactical teams and uniformed officers brought swift justice and victory.

Warrior.  Marine Corps training seeks to seed the warrior spirit, but rather than see themselves as peace officers in the finest tradition of colonial constables, SWAT team members now see themselves as “warriors.”  And note the utterly heroic terms he uses to express the recent travesty of justice in Boston.  “Looking for a fight” … “proud” … “cheered” … “jubilation” by the people.
But I’ve addressed this issue of the fact that they will never be as trained, qualified, or reliable as a well trained military.