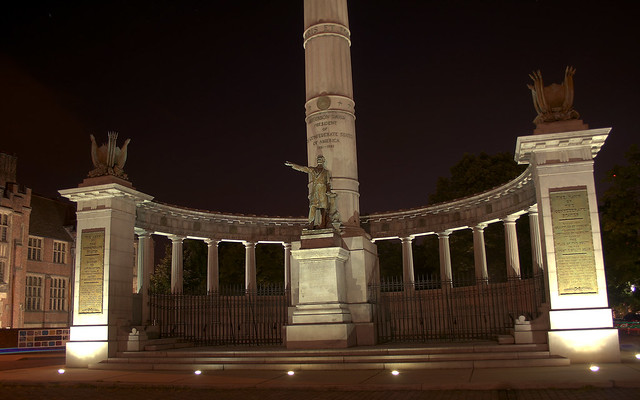 On Thursday evening, May 9th, VCU Film student Rob Walker left class after turning in his short film, “Va Flaggers at Oakwood” for his final exam.

At approximately 9:00 p.m, he drove past the Jefferson Davis Monument on Monument Avenue and observed two young white males at the monument.   Suspicious, he circled the monument to try and find out what they were up to.  On first glance, it appeared they were doing something to the iron fencing.

When Rob pulled up in front of them, he saw that they had a screwdriver, and were attempting to scrape or carve something into the stone of the monument.  He immediately called 911 and dropped the phone in the car seat so that emergency personnel would be alerted and be able to record the confrontation.
From the car, Rob yelled at the men to stop what they were doing and drop the screwdriver.  They refused, and began swearing and shouting at him.

I should mention that Rob is a US Veteran of Operation Iraqi Freedom.  He was injured in, but survived the attack on the USS Cole.

Rob also used to drive a Taxi, and carries with him at all times, from his days as a driver, a cattle prod/club, with a taser on one end.

Armed with the club, he approached the men and again, told them to drop the screwdriver.  The man with the screwdriver refused, and waved it at him in a threatening manner.  When the man came closer, Rob punched the club into his chest and tasered him, at which time the man was rendered helpless and Rob was able to subdue him.  At this point, the other vandal ran off, skeered.

As the subdued vandal came to, Rob (who, by the way, is 6’ plus a bunch)  was able to keep him on the ground by resting his knee on his back, and applying his body weight with his knee.  Meanwhile, the vandal who ran away had returned, and taken position across the street.  After a few minutes, the punk must have decided the police weren’t coming, most likely because they had not seen Rob call them.   He then picked up a stick and came back over to the monument, apparently to attempt to free his partner in crime. BIG mistake.

When the man swung the stick at Rob, Rob blocked it with the club, broke the stick in two, and tagged the vandal with the taser.  Down went the second vandal... lying helpless on the ground beside his friend.

Until the police arrived, Rob held the screwdriver wielding vandal down,  and, as necessary, reached over to give the other punk a gentle tag of voltage each time he recovered enough and attempted to escape.

When the police arrived, they handcuffed the vandals and proceeded to give Rob a lecture about how risky it is to make a citizen’s arrest, especially over an offense so “trivial” as misdemeanor vandalism.  Rob told them that he does not consider vandalism of a Confederate monument “trivial”.   He said that if he attempted to spray paint graffiti on the White House, snipers would take him out with one bullet to the head, so what he did was quite gentle in comparison.

On Veterans’ Day, 2012, Rob happened upon the Va Flaggers as we were out bringing awareness to the vandalism to the RE Lee Monument the night before.  He stopped to interview us, was intrigued by what we were all about, and has been following us ever since, documenting our efforts, and along the way, gaining a whole new respect for the Confederate Veterans we honor.


Flagger Victory in Capital of the Confederacy

We do not believe there are ANY coincidences or happenstance in what has transpired since we began our work 20 months ago.  There is no denying God’s hand in this… in bringing Rob to Monument Ave. last November, and then, miraculously again last night at the exact moment and time to prevent what could have been irreparable damage to one of our most treasured monuments AND facilitating the first arrest (that we are aware of) of these punk vandals that have no regard for the rule of law:  neither God’s nor man’s.

We encourage each of you to send a note of thanks to Rob Walker, for his bravery and courage in protecting the Jefferson Davis Monument, a NATIONAL treasure, and his help in apprehending the worthless individuals who sought to desecrate it.