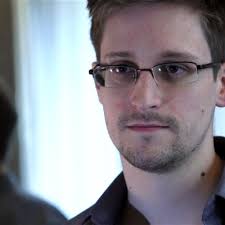 An ex-CIA employee working as a contractor at the U.S. National Security Agency said he was the man who had leaked details of a top secret U.S. surveillance programme, acting out of conscience to protect "basic liberties for people around the world."

Holed up in a hotel room in Hong Kong, Edward Snowden, 29, said he had thought long and hard before publicising details of an NSA programme codenamed PRISM, saying he had done so because he felt his country was building an unaccountable and secret espionage machine that spied on every American.
Both the Washington Post and Britain's Guardian newspaper - to whom he gave the documents he had purloined - published his identity on Sunday.

"I don't want to live in a society that does these sort of things ... I do not want to live in a world where everything I do and say is recorded. That is not something I am willing to support or live under," he told the Guardian, which published a video interview with him on its website.

"The NSA has built an infrastructure that allows it to intercept almost everything. With this capability, the vast majority of human communications are automatically ingested without targeting. If I wanted to see your emails or your wife's phone, all I have to do is use intercepts. I can get your emails, passwords, phone records, credit cards," he said.