The FBI: An American Cheka 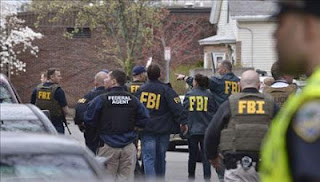 Nearly twenty years ago, then-FBI Director Louis Freeh – still basking in his agency’s residual glory from the Mt. Carmel Massacre of April 1993 – visited Moscow to sign a joint cooperation accord with the Russian Federal Security Service (FSB). After touring the Lubyanka Square headquarters of the Russian secret police, Freeh observed that “Our nations have more in common than ever before.”
At the time I thought it was shocking that Freeh would traduce his country, and his agency, by offering that comparison to the renamed KGB. Roughly two decades later I’ve come to understand that if the comparison is offensive, the Russians have the stronger claim to be the insulted party.
Like their Russian and Soviet siblings, the FBI’s primary role is that of fabricating crimes in the service of the state. Since 1991 – more particularly, since 2001 – the FBI has engaged in this behavior far more extensively than the Russians, both in terms of the volume of fabrications and the geographical reach of its operations. And evidence is accumulating that the Bureau has added assassination to its proto-totalitarian toolkit.