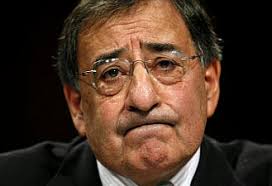 The Project on Government Oversight (POGO) published a leaked draft report from the Defense Department’s inspector general, which found that Panetta had revealed information labeled “top secret” at the awards ceremony.

The report does not indicate whether Panetta knew that Boal was at the event, and Panetta was not interviewed by the inspector general.

“'During this awards ceremony, Director Panetta specifically recognized the unit that conducted the raid and identified the ground commander by name,'” the draft report said. “'According to the DOD Office of Security Review, the individual’s name is protected from public release' under federal law.”


Panetta was director of the CIA during the bin Laden raid in 2011, and he then ran the Pentagon until he retired earlier this year.

The report will add fuel to Republican criticisms that the Obama administration leaked classified information to Boal and director Kathryn Bigelow for “Zero Dark Thirty,” a fictional film based on the hunt for bin Laden.

Republicans had accused the administration last year of working with the filmmakers in order to boost President Obama’s reelection prospects. The film’s release date was moved until after the election in response to the criticisms, although the final version included little about the president’s role. \