Evil Invades Sanctuary: The Case for Security in Faith-Based Organizations 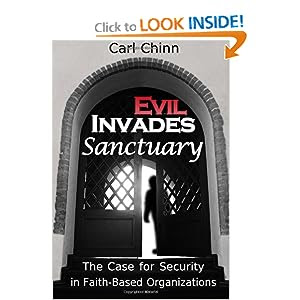 Long-time readers of this website will no-doubt recall the active killer attack at New Life Church in Colorado Springs, CO in 2007. After having killed two people and wounding two others at a YWAM training center, the 24 year-old killer set his sights on New Life Church. What he did not know was that the flock at New Life had protection from wolves such as him, in the form of sheepdogs who made up the church's safety team. Among those sheepdogs was Carl Chinn, author of "Evil Invades Sanctuary: The Case for Security in Faith-Based Organizations."

While many will recall that the New Life Church attack ended when an safety team member Jeanne Assam engaged the killer with the 9mm pistol she had permission to carry in the church, very few may recall that there were other armed safety team members, including Chinn, on hand that day. And although initial news reports made mention of this fact, it's likely that no one who hasn't read the book know the real story about how this team worked together to prevent a greater loss of life.

Chinn's book begins with a chapter called "The Wakeup Call." The chapter opens with a chilling account of an armed, shirtless man with notes scribbled on his body (including instructions on what to do with his body) walking into the lobby of Dr. James Dobson's Focus on the Family headquarters in 1996. Chinn worked there, and had been extensively involved in pre-incident emergency response planning, just as he was years later at New Life Church, when another armed predator came calling.

Chinn observes that "security is often not a priority at ministries until something significant happens."
"Fortunately," he adds, "that was not the case at Focus on the Family or New Life Church."