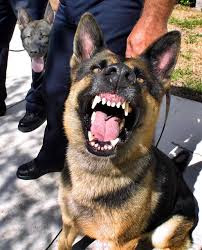 An 11-year-old boy was bitten by a police dog during a simulated drug raid demonstration in Brazil, Indiana last week.

The boy suffered puncture wounds to his calf when Max, the K-9 officer, bit him during a mock drug search presentation.

Judge J. Blaine Akers arranged for K-9 teams to carry out a simulated drug raid for a group of fifth-graders as part of a Red Ribbon Awareness week kick-off event at the Clay County Courthouse.

According to The Brazil Times:

Brazil Police Chief Clint McQueen said a very small amount of illegal drugs were hidden on one of the juveniles to show how the dogs can find even the smallest trace of an illegal substance. He added all this was done “under exclusive control and supervision of members of the court and law enforcement.”

Apparently the children were advised to “stay still” while the dogs sniffed them. The officer’s report explains why he thinks Max decided to take a bite out of one of the children: