Thanks to Ben Bernanke, 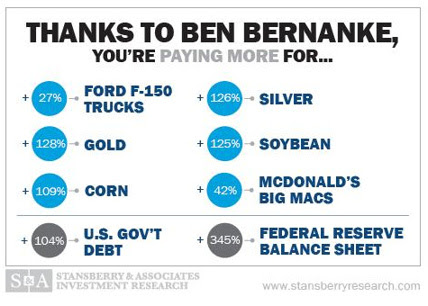 For rich people all around the world, Ben Bernanke has been a living saint.

As I explained recently, the Federal Reserve chairman’s policies have allowed the world’s wealthiest capitalists to borrow unprecedented amounts of money … and buy world-class assets.

Meanwhile, the people whom Ben fleeced – the workers, the savers, the few Americans left with simple industry and thrift, the kind of folks who would never have believed the government would actively try to hurt them – have been wiped out. They’ve seen the real value of their wages, savings and standard of living decline by huge amounts.

If you doubt me, consider the following graphic of indicators. They are real and “unadjusted” (unlike the U.S. government’s various measures of inflation, which have “adjusted” so many times over the years that they’re nearly meaningless).

These indicators show in simple, stark terms exactly what Bernanke did to our economy.