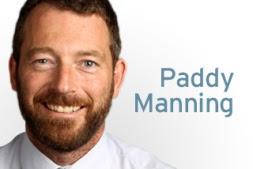 An openly homosexual columnist in Ireland has written a piece blasting his country for considering same-sex marriage, warning the state has no business reinventing the family and undermining children’s “right” to a mother and father.

Paddy Manning, writing in the Irish Daily Mirror, tells of being arrested for hitting on a male police officer, but warns the solution to persecution of homosexuals isn’t to have government carve up traditional marriage.

“Same-sex marriage is not some warm, fluffy equality bunny; it’s a bare-faced state power grab,” Manning writes. “The state gets to entirely remake marriage, not as the man/woman/child model we’ve inherited from 10,000 years of history and across all cultures, but as an anything-goes irrelevant partnership agreement between adults.”

Manning explains same-sex unions will render marriage “irrelevant” because “for the first time, children and parenthood [will have] no place in marriage.”

“Only a man and a woman have children, despite every fantasy the gender-busters want us to believe,” Manning writes. “Every child has a right to that natural life. Same-sex marriage asks us to ignore reality and children’s rights to a mother and father.”