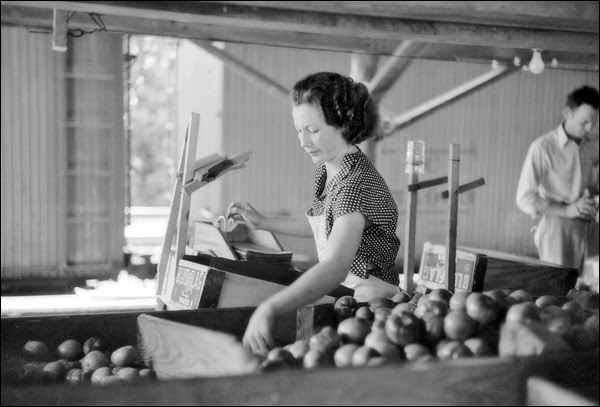 1936. Terry, Mississippi, a tomato packing operation
Terry is a settlement of 1,000 just south of Jackson, Mississippi.

European schools are far less feminized than the American schools.  Most "ADHD" is little more than mothers and female teachers drugging little boys due to their inability to behave like little girls. It's not so much that the French schools are doing it right as the American schools are at war with human nature and the male sex. The lesson, as always, is this: sending children to a public school in America is child abuse.
Vox at blogspot.com

Sniffing the gallows - We went on a bond-buying spree that was supposed to help Main Street. Instead, it was a feast for Wall Street. I can only say: I'm sorry, America. As a former Federal Reserve official, I was responsible for executing the centerpiece program of the Fed's first plunge into the bond-buying experiment known as quantitative easing. The central bank continues to spin QE as a tool for helping Main Street. But I've come to recognize the program for what it really is: the greatest backdoor Wall Street bailout of all time, says Andrew Huszar in this article, Confessions of a Quantitative Easer, at The Wall Street Journal.

A glut of media coverage on the partisan schism between Democrats and Republicans has masked a more fundamental fact: both are part of the same class. They are both members of a ruling elite that uses the political means to feed on the productive class, it is the state versus society. Republican versus Democrat partisanship is an intra class struggle and does not reflect a fundamental clash of goals. They are akin to two criminal gangs who clash because they want to control the same territory and for the same reason: to live by power and privilege, says Wendy McElroy in in this article, Politicians as Interchangeable Units, at Explore Freedom.


New capital crime discovered in New Jersey - Officers approached the man outside the residence on Stanley Street and asked him to remove his hand from his pocket. He did not comply and one officer fired pepper spray at him. The man continued to threaten the officers and did not remove his hand from his pocket. He was then shot and killed by three officers, according to the statement.
Lisa Rose at nj.com

The insurance companies, having spent three years scrambling an egg, must now unscramble said egg. They will have to revive contracts they canceled, pursuant to a law which required their cancellation, yet without any legal leg to undo the do. Hence the lawsuits that will arise, the confusion which will ensue, the absolute chaos which will reign can only but be dimly imagined.
Richard Fernandez at pjmedia.com/richardfernandez

The only legitimate way to interpret the Constitution—or any form or level of law, for that matter, including statutes and regulations—is originalism: the words of the Constitution and every law must be faithfully interpreted in accordance with what ordinary citizens would understand those words to mean... judges should strike down democratically-enacted laws only when the Constitution requires it, not whenever some judge thinks the people are wrong and that the his superior and enlightened understanding of life and liberty entitles him to supersede the will of the people.
Ken Klukowski at breitbart.com

Will govern for food - The truth about government is that it consists almost entirely of people who simply aren't good enough to get real day jobs. All their grandiose central plans and legislation for the betterment of mankind are the desperate ploys of the runts of the litter to convince themselves they are not as helpless as they seem.
Texas Arcane at vault-co.blogspot.com

In 1906, the FDA was created to prevent "the manufacture, sale, or transportation of adulterated or misbranded or poisonous or deleterious foods, drugs, medicines, and liquors." Its claim that trans fat in foods make them adulterated is a deliberate misinterpretation of its powers... The FDA's food policing powers do not give it the right to ban unhealthy foods... The FDA has given itself the authority to ban everything from a glass of milk to a carton of eggs.
Daniel Greenfield at frontpagemag.com

Cincinnati - A little more than half of the homicides reported last year remain unsolved. All but two homicide victims and one suspect were black.
News article at wlwt.com, 2012
In 53 percent of violent crimes nationwide, no one is arrested let alone convicted.
Ted Balaker at reason.com
Philadelphia - 94.4 percent of the homicide suspects were black (81.7) or Hispanic.
phillypolice.com
Philadelphia "no snitch" - In Philadelphia, defendants charged with murder, rape, robbery, and serious assaults were walking free on all charges in nearly two-thirds of all cases.
Craig McCoy at articles.philly.com

WebMD's infomercial payoff - The administration’s top health care official heaped praise on WebMD for launching an online resource to help Americans navigate the complex law... the company, which millions of Americans regularly read for health news, also stood to earn millions of dollars from a federal contract to teach doctors about Obamacare... WebMD says it doesn’t believe it had an obligation to disclose to its broad consumer base its $4.8 million contract.
Jim McElhatton at washingtontimes.com