The Lost Cause: A reporter remembers the agony of South Vietnam. 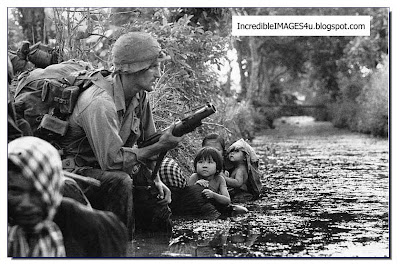 Thirty-eight years after the last American helicopter took off from the roof of the U.S. embassy in Saigon, it might not seem possible for any new book to offer important insights and reporting on the Vietnam war.

Duc, however, does just that. Uwe Siemon-Netto, a Far Eastern correspondent for Axel Springer Verlag, arrived in Vietnam in 1965, early enough to see an elegant, Francophile Saigon not yet metamorphosed into an Asian honkytonk by hordes of GIs, but also early enough to be an eyewitness to harrowing scenes of the Battle of Ia Drang, when U.S. Army forces and North Vietnamese regulars clashed for the first time. Siemon-Netto’s last trip to Vietnam was in 1972, when the famous North Vietnamese Easter Offensive was well underway.

Unlike some American reporters who seldom ventured anywhere outside Saigon, Siemon-Netto ranged far and wide across South Vietnam, dipping in on remote Special Forces bases and brave South Vietnamese Army units who were cutting down from trees the corpses of village elders and their children (including babies) who had been strung up, tortured, and murdered by Communist forces. The author’s love for Saigon certainly includes forthright admiration for the beauty of Vietnamese women in their fetching ao dais, but also for the cocky street urchins who kept his aging Citroen clean and safe by taking refuge in it when it rained. He also writes admiringly of the German doctors and nurses who courageously staffed the West German hospital ship Helgoland, in the face of relentless Vietcong attempts to destroy it, far up north near Da Nang.

Duc is, in parts, hilariously funny, especially when narrating incidents involving foreign reporters in Vietnam or describing the perplexity of the Vietnamese encountering Western culture and social life. But it is also poignant and tragic, especially in reporting the viciousness of the Tet Offensive of February 1968, which Siemon-Netto experienced close-up in Saigon, and whose brutal and bloody aftermath he witnessed in Hue.

He describes weeping Marines coming across hundreds of women and children murdered by the Vietcong on their way to enjoy the holiday. Then, slowly, the full horror of the Tet atrocity emerging when it became clear that the Vietcong had targeted at least 3,000 South Vietnamese civilians on written execution lists even before the offensive started. When this fastidious German reporter came upon a mass grave of victims, he was astonished to find an American television crew standing around with idle cameras. The crew refused to shoot the scene because, they said, they didn’t want to film “anti-Communist propaganda.”

Because he loved the Vietnamese so much, Siemon-Netto became deeply angry that the murderous brutality of the Communist side was never fully reported by American or other Western reporters. Vo Nguyen Giap, the North Vietnamese commander, supervised a military campaign that deliberately terrorized civilians, understanding that, in Giap’s own words, “the enemy does not possess the psychological and political means to fight a long, drawn-out war.”

Unfortunately, General Giap turned out to be correct in his cynicism: Democratic societies are too vulnerable to their own doubts and critics to stomach the vigorous and costly struggle needed to defeat persistent and ruthless tyrannies.

Siemon-Netto was, of course, well aware of some of the civilian murders perpetrated by American soldiers.  He personally reported on the court-martial of Lt. William Calley for his role in the My Lai massacre. There is also a touching scene in which he meets an American machine-gunner who was desolate with grief and contrition because the black-clad figures he had earlier gunned down had turned out to be children. But Siemon-Netto makes it clear that the chasm between Vietcong and American murders was galactic in size: The Communists carefully planned violence against civilians, whereas the Americans punished anyone they could prove had committed such acts.

Ultimately, it was the South Vietnamese who suffered most from the war, ending up under the tyrannical rule of a Hanoi regime that continued to murder thousands of South Vietnamese military and civilians even after it had won the military victory. Duc is a rhapsody of admiration for the warm and talented people of South Vietnam and for those, both Vietnamese and American, who struggled, and often gave their lives, to try to keep the country free.

David Aikman is the author, most recently, of The Mirage of Peace: Understanding the Never-Ending Conflict in the Middle East.
Posted by Brock Townsend at Monday, November 18, 2013