"Che Guevara is an inspiration for every human being who loves freedom." 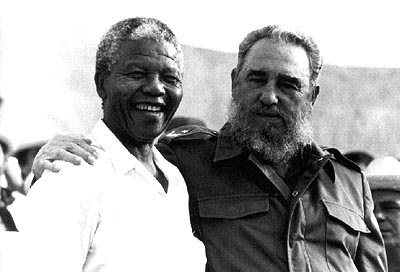 "The cause of Communism is the greatest cause in the history of mankind!"

"There's one place where (Fidel Castro’s) Cuba stands out head and shoulders above the rest – that is in its love for human rights and liberty!"

Here are a few items the Martian would probably never learn regarding Nelson Mandela or the Stalinist regime he adored:

South Africa's apartheid regime was no model of liberty. But even its most violent enemies enjoyed a bona fide day in court under a judge who was not beholden to a dictator for his job (or his life.) When Nelson Mandela was convicted of "193 counts of terrorism committed between 1961 and 1963, including the preparation, manufacture and use of explosives, including 210,000 hand grenades, 48,000 anti-personnel mines, 1,500 time devices, 144 tons of ammonium nitrate," his trial had observers from around the free world. "The trial has been properly conducted," wrote Anthony Sampson, correspondent for the liberal London Observer. "The judge, Mr Justice Quartus de Wet, has been scrupulously fair." Sampson admitted this though his own sympathies veered strongly towards Mandela. (Indeed, Sampson went on to write Nelson Mandela's authorized biography.)