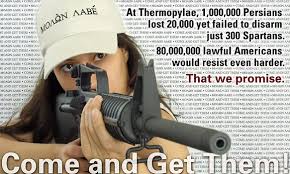 Well I finally read the LTC Bateman opinion piece.  You can read the drivel here: http://www.esquire.com/blogs/politics/bateman-on-guns-120313
Make no mistake, LTC's in the US Army do not put down words lightly.  He meant everything he put onto paper, and truly believes he is smarter than 5 US Supreme Court Justices.  So you have to ask what his agenda is, and why he is making it now?

What the light colonel failed to understand, which is a discredit both on his education and the Officer Corps, is that the 2nd Amendment doesn't give a single right.

The Second Amendment ensures a right to the States to form militias, and ensures that the People of the United Stated of America can keep and bear arms completely separate from militia service.

LTC Bateman should know this, having taught military history at the US Military Academy at West Point.  That he doesn't makes me weep for the cadets who had to suffer through his revisionist agenda.

The Founding Fathers weren't idjits, and so they understood that to have a militia, you needed an armed populace.  By protecting the right of the people to keep and bear arms as an individual right, that protects the right of the states to keep militias for the defense of the State.