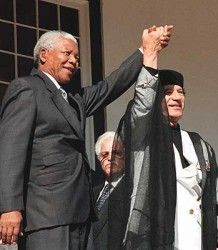 Reaction to my column earlier this week in which I presented 11 shocking quotations from Nelson Mandela was strong.

Americans, who have been drowning in a steady stream of Mandela media adulation, got a dose of stark reality when they read a few of Mandela’s carefully chosen words.

None could refute that Mandela’s own words betrayed the legacy of sainthood the elite media beatified him with.

Many, however, asked for citations on the quotes.

Columns don’t usually lend themselves to footnotes, but in the interest of satisfying many requests for some context behind Mandela’s statements, I am revisiting “The real Mandela in his own words.”

1) “If there is a country that has committed unspeakable atrocities in the world, it is the United States of America. They don’t care for human beings.” Mandela made this remark in a speech Jan. 30, 2003. It was reported by CBS News. Mandela was furious about the U.S. invasion of Iraq and directed much of his fury toward President Bush: “Why is the United States behaving so arrogantly?” he asked. “All that (expletive deleted) wants is Iraqi oil.” I guess it was Mandela’s way of thanking Bush for bestowing upon him two years earlier the Presidential Medal of Freedom, the nation’s highest honor, and for dubbing him “perhaps the most revered statesman of our time.”