The Unfortunately Innate Nature of Intelligence: An Invitation to a Lynching 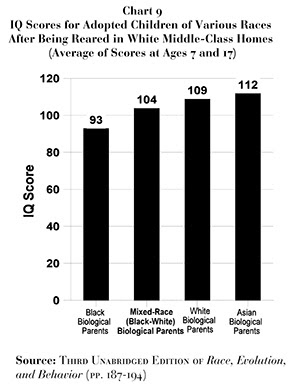 Human races are subspecies of Homo sapiens (sic), just as basset hounds and Chihuahuas are subspecies of dog. The breeds of neither are precise genetic categories: In the words of the heroic John Derbyshire, genetically “what you see is a continuum with some pretty sharp clines.” Yet the genetic commonalities are sufficient to be obvious: At a glance one can distinguish between a Japanese and a Norwegian, or a Siberian wolf hound and a dachshund.

Anyone having experience with dogs knows that these admirable creatures differ in intelligence. Border Collies are simply smarter than pit bulls. Since there is no political penalty for noticing this, it is widely noticed and not disputed. Yet if subspecies of Bowser differ markedly in intelligence, it would seem to follow that subspecies of humans, who differ in color, hair, biochemistry, facial features, brain size and so on, might also differ in intelligence.  That is, there is no prima facie biological reason for believing that they cannot. There are many political incentives.


More @ Fred On Everything
Posted by Brock Townsend at Tuesday, February 18, 2014