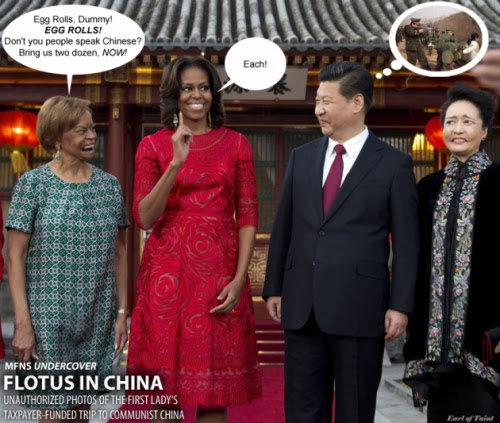 There is no shame felt by those who think they are gods and gifts to mankind.

The White House banned journalists from accompanying Michelle Obama on her trip to China and explained that it was because the purpose of her trip is not political. Some news outlets even repeated the White House’s assertion of the non-political nature of the visit without mentioning that the press was not allowed to accompany them. So much for the “most transparent White House in history”.
In a speech rife with political overtones, she lectured the Chinese:


“And that’s why it’s so important for information and ideas to flow freely over the internet and through the media; because that’s how we discover the truth.”

So Michelle Obama lectures a communist police state about free speech standards, while Obama is busy spying on journalists and spurring the Democrats in the Senate to redefine who is allowed First Amendment Press and Speech Rights, while restricting access to information in the U.S.