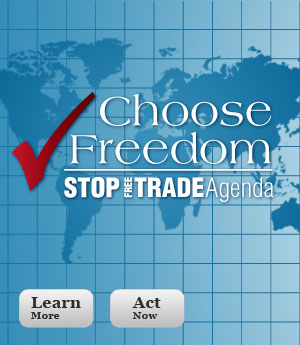 The key to victory in our fight to stop the two mega free trade agreements - the Trans-Pacific Partnership (TPP) and the Transatlantic Trade and Investment Partnership (TTIP) - is to stop Congress from approving a new Trade Promotion Authority (TPA) bill. Of course, TPA is just the new name for "fast-track authority," which has been used to steamroll free trade agreements, such as NAFTA (North America) and CAFTA (Central America), through Congress for several decades now by allowing only an up-or-down vote on such agreements within 90 days with no amendments or filibusters permitted.

It is very widely accepted that the TPP and TTIP agreements cannot be approved by Congress without TPA in effect. Although a bill that would authorize TPA, Bipartisan Congressional Trade Priorities Act of 2014 (H.R. 3830 in the House and S. 1900 in the Senate), was introduced on January 9, it appears that there is not enough support in Congress at present to assure passage. As usual, most Democrats and some Republicans are leery of free trade legislation. Senate Majority Leader Harry Reid went so far as to say this regarding the TPA bill in the Senate, "I'm against fast track.... Everyone would be well advised not to push this right now." When asked whether he would stop action on TPA, Reid said, "We'll see."

Reid's attitude doesn't mean that TPA won't be passed this year, but it is making approval of TPA look like an uphill battle.

Although we're delighted to hear that support for TPA appears to be lacking, we can't afford to be complacent. Back in the 1990s when NAFTA was being debated in the media, there were many articles claiming that NAFTA was in trouble and wouldn't be passed. However, we know the outcome: NAFTA passed, and the establishment elites working for a New World Order got what they needed as a foundation for their next step, the North American Union (NAU).

Then, a funny thing happened on the road to the NAU. The JBS and allies slowed down the NAU project so much that now we're hearing that the TPP and TTIP agreements will leapfrog over the NAU step and bring about economic and political integration of the United States with 11 (and more to come, such as China) Pacific Rim nations and the European Union.

We know that what the establishment elites want, they generally get. However, we must break this pattern of the creation of larger and larger blocs of nations before we lose our national independence and personal freedoms for good.

So, stopping U.S. involvement in this whole long-term pattern of ever-larger economic and political blocs of nations boils down to stopping the TPA bills in Congress this year. We can't afford to be complacent. We've got to assume that they have a good chance to pass unless we create sufficient opposition to vote them down. And, there's already some talk of passing the TPA bills in a lame-duck session of Congress after this fall's elections, if need be.

We must ramp up our efforts to stop passage of the TPA bills, H.R. 3830 in the House and S. 1900 in the Senate, beginning now. We don't know when the votes will be, so we need to build opposition quickly, and then sustain that opposition all through the year. Our national independence and personal freedoms are at stake!

Click on the "Choose Freedom - STOP the Free Trade Agenda" action project graphic above for further educational and action tools.
Please send a prewritten, editable email to your representative and senators in opposition to authorizing Trade Promotion Authority for the Obama administration.

Phone calls can also be very effective, and of course, the most effective way to educate your congressmen and staff is by making personal visits to their offices. Click here for contact information.

Your Friends at The John Birch Society
Posted by Brock Townsend at Friday, March 21, 2014