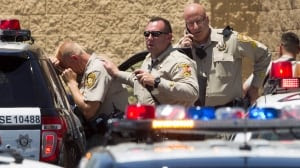 Two Las Vegas police officers and one civilian were shot and killed Sunday when a gun-toting duo went on a killing spree before shooting one another dead in an apparent suicide pact, authorities say.

Las Vegas police spokesman Larry Hadfield told The Associated Press that the spree began around 11:30 a.m. Sunday when a man and woman walked into CiCi's Pizza restaurant on North Nellis Boulevard and ambushed two officers who were eating lunch.

Sheriff Doug Gillespie identified the two officers as Alyn Beck, 42, and Igor Soldo, 32. He said one of the officers was able to fire back at the suspects before dying.

The suspects then grabbed the officers' weapons and ammunition and stormed out of the pizzeria, Assistant Sheriff Kevin McMahill told KVVU Fox 5.

The duo fled to the Walmart across the street, where they shot and killed a person at the front door and then killed themselves in an apparent suicide pact, Hadfield said.