Iranian leader celebrates: U.S. has 'given up'. Mocks Obama with banner, 'America cannot do a d--- thing' 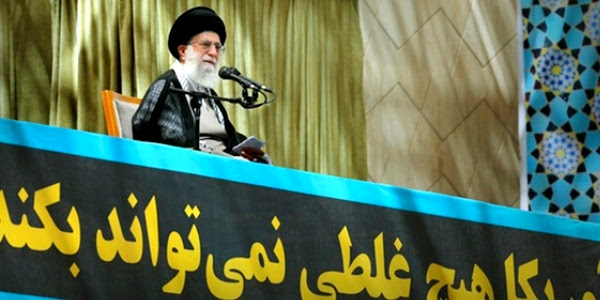 Iran’s Supreme Leader Ayatollah Ali Khamenei took to the stage last week to proclaim the U.S. has “given up” on using military force to stop its ambitions and to boast that a worldwide “Islamic Awakening” cannot be stopped.

Speaking on the occasion of the 25th anniversary of the death of his predecessor, Ayatollah Ruhollah Khomeini, the founder of the Islamic Republic who died in 1989, Khamenei issued his first public reaction since U.S. President Barack Obama asserted in a foreign policy speech at West Point that his diplomatic relations with Iran were proving more effective than the threat of military action.