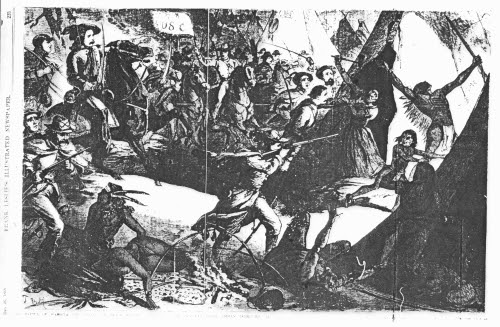 In 1876, Gen. George Custer led his 7th Cavalry regiment to their demise in Montana.  The Battle of Little Big Horn was one of the biggest defeats suffered by the U.S. Army in the war against the Indians.   It is only in recent years that proper attention has been paid to the role of atrocities by Custer and other military leaders in stirring up the wrath of oppressed Indians.

I visited the Little Big Horn Battlefield National Monument 45 years ago during a cross-country trip as a 12-year-old boy to a Boy Scout Jamboree in Idaho. Like most Scouts, I subscribed to the Patriotic Version of American History. After visiting the battlefield, I scribbled (or copied) a note that the Seventh Cavarly’s “heroic defense made the nation yearn for details that no white man lived to tell.” Many years later, I learned that Custer’s men were wiped out in part because the Army Quartermaster refused to permit them to carry repeating rifles – which supposedly wasted ammo. The Indians didn’t have a quartermaster, so they had repeating rifles, and the rest is history.

Custer also played a leading role in the 1864 desolation of the Shenandoah Valley, where I was raised a century later. After failing to decisively vanquish southern armies in the battlefield, Lincoln and his generals decided to win the war by brutalizing civilians. In August  1864, Gen. U.S. Grant  ordered  the destruction of all the barns, crops, and livestock in the Shenandoah Valley.  The etching to the left shows his troops after torching much of the town of Mt. Jackson, Virginia.  The population of Warren County, my home county, fell by 20% during the 1860s. Did anyone who refused to submit to Washington automatically forfeit his right to live?  The desolation from the war and the systemic looting in its aftermath (ironically labeled “Reconstruction”) helped keep the South economically prostrate for generations.