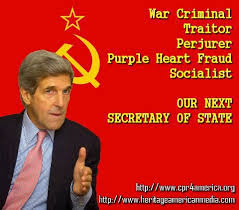 The obsession by the Obama-Kerry administration with imposing a cease-fire on the warring parties in the Hamas-Israel war will go down in history as one of the most strategic mistakes in military history.

Here is a fact the administration deliberately and maliciously ignored: In the history of modern warfare, no terrorist group has ever honored a cease-fire. Hamas has broken every cease-fire it ever said it would honor. Every single one.

Even the Israel-Hamas 2012 cease fire, brokered by then-Secretary of State Hillary Clinton, was simply agreed to by Hamas to give it an opportunity to restock its military arsenal, pressure Israel to lift its restrictions on the import of cement and steel into Gaza – material that Clinton said would be used to build hospitals and schools, but in fact was used to build a network of underground tunnels into Israel and build a subterranean network of underground bunkers, weapons storage facilities and launching pads.

Hamas simply used the cease-fire to rebuild its military infrastructure and as predicted by Israeli military intelligence, would simply break the cease-fire when it felt ready to take on the Israelis once again.

And on Friday, Hamas did the exact same thing.