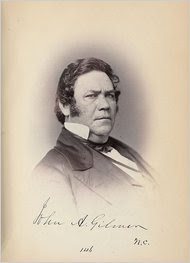 Lincoln’s only attempt at including a Southerner in his cabinet was sounding out North Carolinian and Congressman John Gilmer, who was “wary, mistrustful of Lincoln and reluctant to ally himself with an administration” opposed to the interests of his State and section. The few conservative Republicans feared that should Gilmer not accept, Lincoln would select radical hard-liner Montgomery Blair and simply add more fuel to the sectional-crisis fire.
Bernhard Thuersam, Chairman
North Carolina War Between the States Sesquicentennial Commission
"Unsurpassed Valor, Courage and Devotion to Liberty"
www.ncwbts150.com
"The Official Website of the North Carolina WBTS Sesquicentennial"

“[Far from Fort Sumter] the president-elect was still at work composing his cabinet . . . [and] the impossibly tangled party considerations that continued to vex him.  As [President James] Buchanan’s advisors planned their [Ft. Sumter] reinforcement expedition . . . Lincoln was committing the first major blunder of his administration.  It began on Sunday, December 30 . . . when he met with that “greatest of Pennsylvania wirepullers,” Simon Cameron, about a place in the cabinet.

[Lincoln] knew it would be a controversial appointment.  For one thing, Cameron’s easy movements from the [Democrat party] to the Know Nothings to the Republicans had gained him a reputation as an unprincipled opportunist.

More damaging was the taint of corruption that surrounded him. Known to his critics as “the Great Winnebago Chief” for his mishandling of Indian funds in the 1830s, Cameron was also charged with manipulating elections and legislatures through bribery.  Yet so many recommendations poured into Springfield that Lincoln could hardly see how not to appoint him.

It was one of the first important choices Lincoln had made for himself since the election, and he immediately had cause to regret foregoing his usual process of passing his decisions by [Lyman] Trumbull and [Hannibal] Hamlin . . . word of the selection [of Cameron] provoked a flood of outraged letters and visits from Republican leaders.

Displaying an indecision that was characteristic in those early months, Lincoln immediately reversed himself . . . [and] addressed a short, private note to Cameron rescinding his offer . . . [but] the imbroglio . . . exploded into what one historian has called “a mighty battle of Republican factions.”

For the next several weeks Republican managers throughout the North appeared considerably more concerned with the patronage than with secession.

Placing [Salmon P.] Chase at the head of the Treasury Department [would reconcile] the powerful New York radicals to [William] Seward’s appointment [as Secretary of State].

[But] Lincoln was aware of the predicament of Southern unionists and the damage Republican rigidity [against compromise] might do to their cause.  Nominating Chase, a long-acknowledged leader of the radicals, would give secessionists a powerful weapon in their fight to convince Southerners of Republican hostility.”